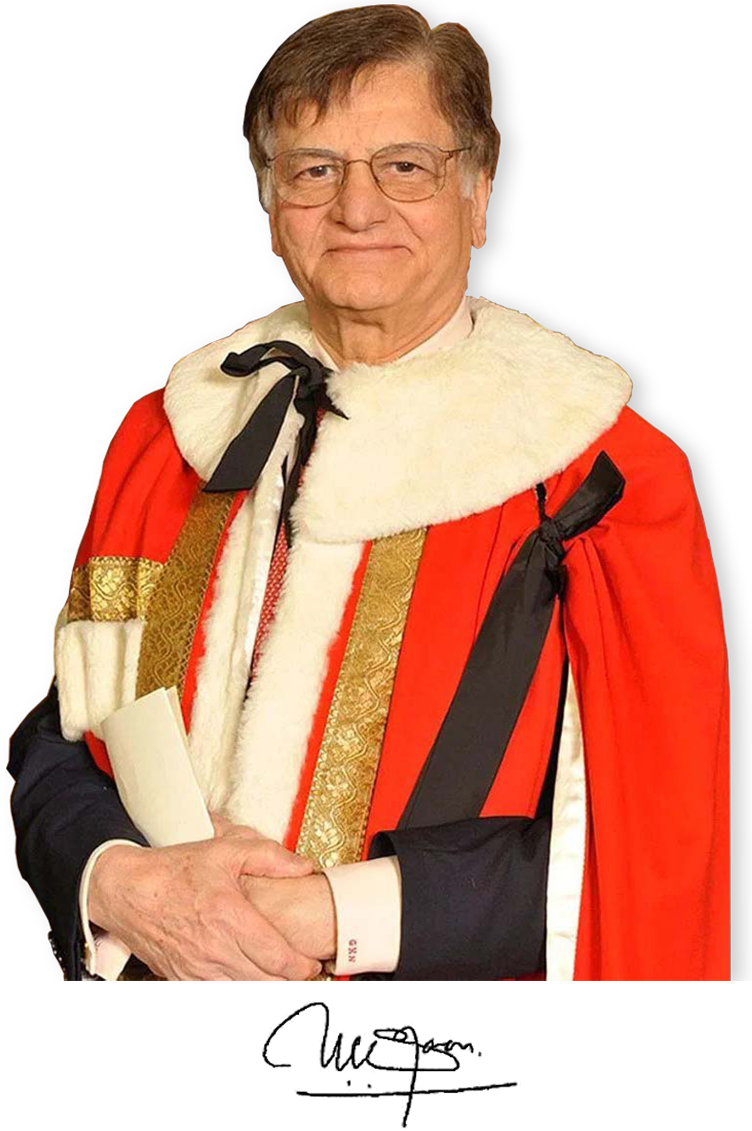 Lord Noon was a renowned British based businessman and entrepreneur who has founded and operated a number of major food manufacturing companies in London specializing in ready meals, Indian Sweets, savories and aviation catering. He was non-executive Chairman of Noon Products Ltd which he founded in 1987 and is now part of Kerry Foods Ltd. He was also The Founder Chairman and Managing Director of Bombay Halwa Ltd (Royal Sweets) (1971), which remains at the heart of his business as a leading manufacturer of Indian sweets and snacks, along with being a major provider for aviation catering.

Born Gulam Kaderbhoy in Bombay, he was the third child of Kaderbhoy Ebrahimjee and Safiabai (nee Shirazi). He was nicknamed ‘Noon’ at an early age by his mother, which he eventually took on as his surname as a young man.

His grandfather had two shops making Indian sweets in Bombay. Lord Noon own father died when he was a young boy and the family struggled, living in a single room with his mother and uncle determinedly trying to grow the business. Lord Noon worked in the shops as a boy, while also pretending that school started earlier than it did so that he could regularly fit in two hours of cricket with his friends before lessons. Cricket continued to be one of his true lifelong passions. At 17 he took over the shops and changed their name to Royal Sweets.

In 1966, Lord Noon made his first visit to Britain as a tourist and liked what he saw; “a soft country”, as he called it, and resolved to return. In early 1970 he came back with £50 in his pocket and set up a new business, Bombay Halwa, and opened Royal Sweets shop in Southall, London. Lord Noon later, in partnership with the Taj group, moved to the US to set up a factory supplying Indian food to New York restaurants. He called that venture a “disaster”, describing the US as a market that wasn’t ready for Indian food. He sold his share in the business and returned to Britain in 1984

His experience in the US, rather than discouraging him, put the “fire in his belly” and led him to establish Noon Products in 1988 to provide chilled and frozen ready Indian meals for supermarkets in the UK. Lord Noon first order was from Birds Eye, and this was quickly followed by orders from Sainsbury’s and Waitrose, two of the UK’s largest food retailers. Lord Noon believed deeply in loyalty to his staff and customers as well around him, evidenced when he continued to pay all his staff after his factory burnt to the ground in 1994. This loyalty was repaid when all of his staff and customers stood by him, whilst the business was being rebuilt. Lord Noon always had a good business sense and eventually sold his business to the lrish food group Kerry in 2005. Throughout this time, he remained as Chairman of the company that carried his name. By 2006 the factory was employing over 800 people and manufacturing over a million meals a week. Along the way Lord Noon helped to change Britain’s eating habits. Known as “The Curry King”, he made chicken tikka masala the nation’s favorite dish and also created Bombay Halwa.

After receiving an MBE for services to the food industries, Lord Noon was knighted in 2002, for services to business and made a life peer in the house of lords in 2011, amongst his many contributions of British society he was on the advisory council of the prince’s trust and was appointed Chancellor of University of East London in 2013. He founded the ‘Asian Business Association’ in 1995 and was elected president of the London chamber of commerce and industry in 2002 as the first non-white president in 126 years. He also set up the Lord Noon Foundation in 1995, to focus on educational and health causes in the broader community.

Lord Noon commitment to the British way of life and his readiness to speak out against extremism made him a voice that was listened to. His blunt speaking was legendary and as an early voice warning against the influence of radical imams, his views were sought after by Downing Street. In 2008, he survived the terrorist siege of the Taj Mahal Hotel in Mumbai, barricading his room against gunmen in the corridor. When India refused to bury the terrorists, he described it “as a good symbolic massage for the rest of secular India,” adding; “now Britain needs to get tough with the radical imams.”

Lord Noon managed to instill his values of compassion, kindness, love of family and friends in those who were close to him-especially his family. He always said that his family was important to him-particularly his two daughters and his grandchildren. He was also a man of faith, though not blind faith. He respected all religions and took issue with those who used it to exploit, control or harm others. His values were instilled in him by his beloved mother and also from his community, the Dawoodi Bohras.

Sayings from some prominent leaders around the Globe